From ancient to modern times, gold has fascinated us. It has been discovered in streams and rivers all across the world. Because of its shine and luster, it is no wonder that gold is so eye-catching.

In fact, it used to only be used to make objects like jewelry and idols. For thousands of years we have been mesmerized by it. Representing wealth, it is a beautiful metal that has been used in many types of jewelry even as money.

At one point, the U.S. minted gold dollar coins that were used as currency. But, were these gold dollars made of real gold?

Produced from 1849 to 1889, these gold dollar coins were made up of real gold. In fact, it consisted of 90% real gold. This gold dollar was the smallest denomination of gold currency ever produced by the U.S federal government.

When the U.S. started its coinage system, they had no plans to include a gold dollar. It wasn’t until the late 1840s after 2 gold rushes, that Congress wanted to expand the use of gold in the country and include it in its currency. So, the gold dollar was authorized by the Act of March 3,1849 and soon began circulating in transactions.

Now, gold is valuable and so is the gold dollar is the smallest coin in the U.S. history of coinage. Early coins didn’t have their value marked on them and used to be weighed in order to differentiate them from other coins. The weight of the money would be what they were worth.

This and the fact that they were mostly made out of real gold are reasons why the coins were so small.

There were actually 3 types of gold coins that were made out of 90% real gold and 10% copper during this period. These gold dollars were made between the years 1849 and 1889. The first type of gold coin was the Liberty head. This was a small-size type produced from 1849 until 1854.

In 1854, the second type of gold coin was made. It was thinner and larger in diameter than the first type and was called the Indian Princess Head. This large type featured a design of a female wearing a feather headdress.

Then in 1856, the third type was produced. For this type they slightly enlarged the Indian Princess’s head on the design. These were the only true gold coins minted for U.S. currency.

There have been some gold colored coins that were circulated, but these don’t contain any real gold and were gold only in their color.

To see some of the popular collectible gold coins (made from real gold) just click here. 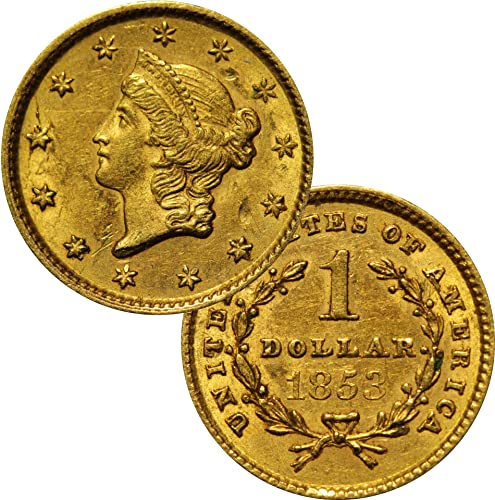 Are Gold Dollars Worth Anything?

Around 1500 BC in ancient Egypt, a region called Nubia was benefiting greatly from its gold. So, they decided to make it the first official medium of exchange for international trade.

They created a Shekel which weighed 11.3 grams. Made from about ⅔ gold and ⅓ silver, this became the standard unit of measure in the Middle east. As years passed, gold was experimented with and it was discovered that by mixing it with other metals, a more durable and different colored metal was formed.

Today, gold continues to be mined in many places around the world and remains one of the most valuable metals. Now we know that gold is valuable and that gold dollar coins were made with real gold. So, you may be wondering whether gold dollars are worth anything today?

Gold colored dollar coins (like the Presidential and Sacagawea coins) are only worth their face value ($1) unless they have an error that makes them more rare and therefore more valuable.

Only the 1800’s Liberty Head and Indian Princess Head gold dollars are made with real gold and are worth something. The Presidential and Sacagawea $1 gold coins are fun coins to collect because of their history, but since they don’t contain any gold, they are only worth their face value of $1.

Precious metals, gold, silver, and platinum, are valuable but other metals aren’t worth much at all. Since the Presidential and Sacagawea $1 gold coins are made with copper, manganese, brass, zinc, and nickel, they are shiny and gold in color but are not valuable.

However, those older 3 types of gold dollars that contain real gold are valuable.

Like we said before, the Liberty Head and Indian Princess head gold dollars are worth quite a bit. Exactly how much that is depends on if the coin is rare or not as well as its current condition.

Rare coins are going to be worth more than common coins. Collectors like to have rare coins and will pay a good price for one. If you own a gold dollar coin and are curious how much it is worth, the best thing to do is take it in for an appraisal. 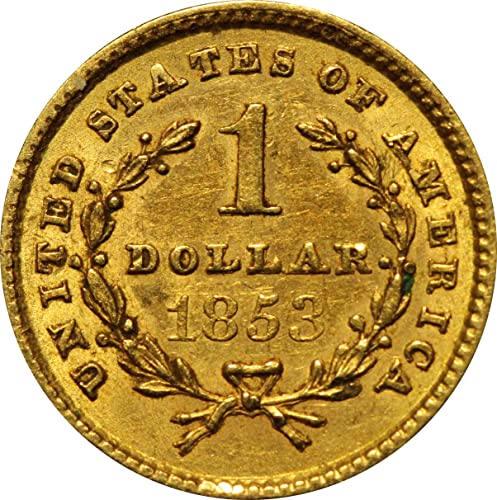 Since gold has attracted people for thousands of years and became a medium of exchange that could be used all over the world. For a time, a gold standard was established where gold backed up currency. But, over time, this was abandoned by all countries.

There was a time in history when gold coins were minted but civilians took advantage of this and started making their own. They hammered gold into irregularly shaped coins and used them as currency. The irregular shape of these gold coins made it possible for the people to clip off the edges and make more coins.

This was called “clipping”.

But, clipping the coins made it weigh less than it was worth. They also didn’t have the special engraving that the real gold coins had which made them not able to be used as currency.

Eventually, gold was replaced with coins and paper money and was no longer used in transactions. Some gold dollars are in collections today and because of their value in gold and history, they are incredibly valuable.

Gold is not only beautiful but also valuable. Gold dollars made between the years 1849 and 1889 were made with real gold. Real gold coins consist of 3 types of coins containing 90% gold. The Liberty Head and Indian Princess Heads are the only real gold dollars made in the U.S.