Mining the planet Earth and harvesting her riches is a part of human history dating back thousands of years. In fact, the practice of mining is impossible to date. It is only because of the discovery of certain ancient artifacts that archeologists claim mining is almost as old as humanity itself. Once people realized they could mine for gems, metals, fuel and minerals the challenge was how to go deeper and produce more. The deepest mine in the world is the Mponeng Gold Mine in South Africa near Johannesburg.

What Is the Deepest Mine in the World?

The depth of the mine is compared to 10 buildings the size of the Empire State Building. The world refers to it as the deepest hole excavated by mankind with almost mythical proportions. Approximately 4,000 workers make the 90-minute trip every day to work in the mine via an elevator cage that transports 120 miners at a time.

The first elevator stop is about 1.6 miles underground where passengers working the first stage of the mine begin their day. The second cage takes the miners the rest of the way with the final mining area accessed on foot or vehicle. However, this does not include the additional 236 miles of underground tunnels dug to access an area comparable to the New York subway system. The deepest mine in the world is owned and managed by AngloGold Ashanti Limited, a global gold mining company established in 2004 following the merger of AngloGold and the Ashanti Goldfields Corporation. They estimate total revenue of the company at $5.33 billion.

It employs more than 62,000 people who mine more than 5,000 metric tons of rock each day. For the Mponeg Gold Mine to realize a profit, the company only needs 10 grams of gold from every ton excavated at the price of $19.4 per gram. The name Mponeng in the Sotho language (a local South African language) translates as “look at me.”

In 2017, China produced more gold than any other country when it harvested 429.4 tons. Australia came in second by producing 289 tons. Russia produced 272.3 tons for third.

The Mponeg Gold Mine in South Africa ranks fifth for gold production, but it ranks first for its mineral riches, such as its harvested chrome, manganese, platinum, vanadium and vermiculite.

Also, the Mponeng Gold Mine ranks as the second-largest producer of ilmenite, palladium, rutile and zirconium.

The Mponeng is also the world’s third-largest exporter of both coal and iron ore, and supplies its ore to China, which happens to be the world’s largest consumers of iron ore.

The AngloGold Ashanti’s Mponeng Gold Mine is still expanding, going deeper than nearly 2.5 miles with expectations of extending the mine’s life beyond 2040.

Where Is It Located?

The Gauteng province of South Africa is home to the AngloGold Ashanti’s Mponeng Mine. The company mines to the average depth of nearly two miles below the Earth’s surface, making it the deepest mine in the world. It is also one of the richest gold mines having produced grades over 8g/t. The AngloGold Company has two additional projects taking place in the West Witts — the Savuka and TauTona mines.

History of the Mponeng Gold Mine

Diamond and gold discoveries made significant contributions to the growth and prosperity of South Africa in the early years of mining.

Northeast of Cape Town, in an area named Kimberley, rich diamond deposits were discovered, resulting in thousands of people trying to cash in on the discovery.

Later on, the British annexed the studded fields as a region of Griqualand West. In 1868, the republic tried to annex areas located nearby causing protests from the British colonial government. These annexations resulted in the First Boer War of 1880-1881.

Just 5 years later, gold was discovered in Witwatersrand, spawning the inevitable Witwatersrand Gold Rush of 1886. The diamond and gold discoveries drew great crowds of foreign expatriates to the region. This resulted in political tension leading up to the Second Boer War in 1899.

Only a few European entrepreneurs became owners of the diamond and gold mines, among them: The deepest mine in the world continues to produce vast amounts of gold, fuel, minerals and gems. During the early 20th century, it tripled the economic value of the Union of South Africa.

The revenue from exported gold provides enough capital to buy essential equipment, critical machinery and the petroleum-based products needed to run the growing manufacturing base.

Gold Production in the Deepest Mine in the World

The U.S. Geological Survey estimates that South Africa holds approximately 50% of the world’s gold resources, and almost 40% of reserves.

As of July 2018, the Mineral Council of South Africa reported that 75% of the mines in South Africa are not showing profits due to a decline in gold reserves. 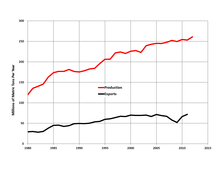 In addition to the deepest mine in the world, two other South African gold mines are also deep:

At extreme depths such as these, temperatures of the surrounding rocks can reach 140 °F (60 °C) making it necessary to pump ice down to the tunnels. As the deepest mine in the world gets even deeper, the Mponeng Gold Mine combats the effects of extreme heat on the miners by pumping a mixture of ice-slurry and salt down from the surface. Powerful fans blow air over the ice, creating a unique internal weather system inside the mine which keeps the workers protected against heat related injuries. Over time, the gold which originated in the Witwatersrand Basin area moved along river deltas forming deposits around greenstone belts located to the west and north. Rhenium-osmium isotope studies show that the gold in the mineral deposits originally stemmed from unusual intrusions called komatiites (volcanic rock having low silicon, potassium and aluminum, and high to noticeably higher magnesium content).

South Africa remains a world leader in the production of diamonds since 1868. The main sources of the diamonds (including the seven sizeable diamond mines around the country) are under the control of the De Beers Merged Mines Company. In 2003, the De Beers operation accounted for 94% of Africa’s total diamond output of nearly 12 million carats plus the 6% of the diamond operations controlled by JK Minerals Africa. This figure reflects both gem stones and industrial diamonds.

South Africa is the world leader in platinum and similar metals, producing 78% of the world’s platinum and 39% of its palladium. More than 178 tons of platinum was produced in 2010, generating export revenues of $3.82 billion. Palladium production comes either by recovery or mining. Today, Russia and South Africa are the largest producers of palladium in the world.

Chromium is also an important product of the deepest mine in the world. The chromium mined in South Africa is an essential ingredient when making stainless steel and in many industrial applications. Chromium mining occurs at 10 different sites around the country. The chromium that comes from South Africa accounts for 100% of the world’s total chromium production in 2005 and comprised 7.49 million metric tons of material.

South Africa ranks number two for having the largest uranium reserves globally. The Nuclear Fuels Corporation of South Africa (NUFCOR) was the first to process uranium as a byproduct of mining gold. Since 1967, much of the uranium harvested via this golden byproduct is part of gold fields of the Witwatersrand area.

Uranium is much easier to possess and more readily available than gold in South Africa. The following South African companies either own or control many of the mining processing plants that get uranium because of mining gold:

The Past, Present and Future of Mponeng

The sinking of the first Mponeng shafts began in 1981. Within 5 years, the main shaft was completed. The sub-shafts were completed in 1993. Mponeng Mine is still the deepest mine in the world increasing its levels from 109 to 120.

Workers are extracting the ore from the Carbon Leader Reef (CLR) below it. This project makes it possible to develop smaller projects which help to extend the life of the mine. Another important project is the “VCR below 120.” This describes the process of accessing the mineral reserves below the 120 level.

AngloGold Ashanti estimates the cost of the project at $252 million over a 10-year span. The company also predicts the project will add 2.5Moz to production during that time. The company reports that the VCR below 120 project should extend the life of the mine by eight years.

The products that come from the Earth make life, as we know it, possible. Producing volumes of gold, diamonds and other priceless treasures is the deepest mine in the world — the Mponeng Gold Mine.